Homemade Vanilla - How To 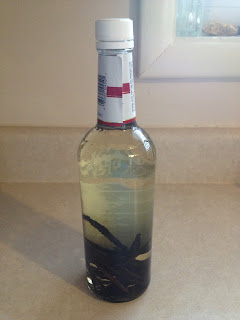 Today I finally bit the bullet and made some homemade vanilla. Before my husband deployed the first time we went on a cruise and visited Mexico and ever since I have been a bit of a vanilla snob!
I always liked the real vanilla my mother's friend had brought her back from Mexico. So when I was there and had the chance I purchased several bottles to bring home as gifts (well that was my intent, I actually used almost all of them myself). Since my husband and I have not been to Mexico for several years, and don't have plans to in the near future, when I ran out about a year and a half ago I did what anyone in my shoes would have done; I ordered it off of Amazon

and it did not let me down! So while I know where to get amazing vanilla I am trying to be more and more frugal and attempted to make my own. I have actually been wanting to do this for a while so I had the vanilla beans in my cabinet. When I was on a quick trip to a large department store (affectionately known to my family as Wally-World) I purchased the cheapest bottle of vodka they had. 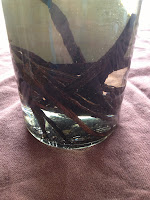 (The difference between vanilla extract and imitation vanilla is giant and vanilla extract can only be made with alcohol. If you do not drink alcohol and feel weird about buying vodka please know it will evaporate out of your cookies and leave only a wonderful vanilla flavor behind.)


I used this website as a guide and just went from there. The concept is simple. Take out your vanilla beans (I used 10), slice them open to allow the vodka to get inside the bean, stick them into the vodka, re-seal the bottle bottle and place it in a closet or cabinet. Shake the bottle about once a week and six weeks later tada...you have vanilla extract.

So what's that verdict? You can save $11 if you do it yourself. Now to wait the 6 weeks and see how it turns out.
Posted by Syd's Sensible Solutions at 1:39 PM

Email ThisBlogThis!Share to TwitterShare to FacebookShare to Pinterest
Labels: Frugal